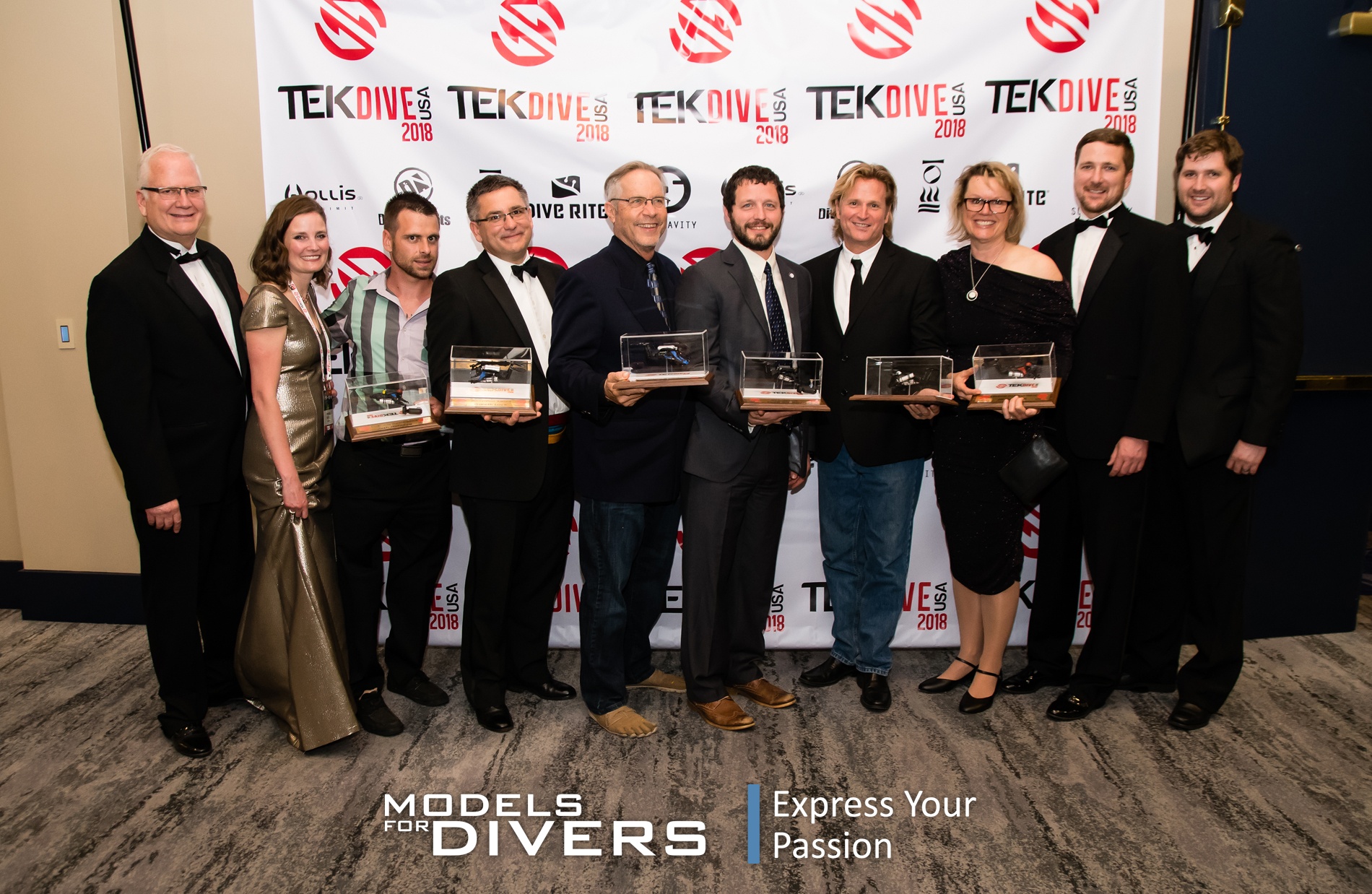 Our first award is the TEKDiveUSA 2018 Exploration Award - “For significant exploration in the field of technical diving.” - Marty O-Farrell

Every explorers dream is to push the limits, to lay line in virgin territory and to push exploration forward. On January 10th, 2018 a team of divers in Quintana Roo,Mexico discovered and complete the connection between Systema Sac Actun and Systema Dos Ojos, making Systema Sac Actun the longest underwater cave system in the world. Explorer and underwater videographer Marty O'Farrell captured the completion of this 15 year journey towards making this connection. Our TEKDiveUSA.2018 Exploration award goes to Marty O’Farrell.


Our second award is the TEKDiveUSA Media Award.  “For most influential technical diving publication.”- Michael Menduno

It is said that Janice Dickensen was the first one to call herself a supermodel. If that’s true, then our industry’s own original super model and the first one to coin the phrase “technical diving” is one of a kind. There are few people in this sport who have a knack for preserving and celebrating the history of our community while still being inspired and engaged with the future. Michael Menduno is someone who makes things happen. Though he has be writing about technical diving and technology for more than 25 years, he has is still prolifically spreading the good news of our sport. His work has appeared in Alert Diver, AQUA, Asian Diver, Business 2.0, Discovery, DiveLog Australasia, DIVER, NACD Journal, Outside, Quest, Scientific American, Scuba Times, Sports Diver, Undercurrent, Undersea Journal, WIRED and X-Ray magazines.
He founded and served as editor-in-chief for aquaCORPS: The Journal for Technical Diving, and its sister publication TechnicalDIVER (1990-1996), which helped usher tech diving into the mainstream of sports diving. He is currently covering projects all over the world and writing a regular column for the Historical Diving Society.


Our third award this year is the TEKDiveUSA 2018 Diver of the Conference Award The inscription reads as follows: “For inspiring technical divers around the world and significant contribution to the technical diving field.” - Josh Hotaling

Hotaling, 27, was born in Sacramento but grew up in Roseville California. In 2011, he was serving his second stint in the Marines, when he stepped on an IED (improvised explosive device) and lost both his legs. Now, with the aid of two prosthetic legs, Hotaling has moved on with his life that includes scuba diving with injured vets and yes, horse racing.  As a active cave diver and CCR diver, Josh is lifting the bar for what is achievable for wounded warriors and in the process is inspiring and motivating the entire technical diving community.   Quote from Josh “I want to work with wounded vets,” he said. “I want to finish my scuba certification and be an instructor. I don't want to just be taken on these trips I want to help out. I want to dive and promote SUDS (Soldiers Undertaking Disabled Scuba). Diving is my passion and I want to help others."

Please join me in welcoming our TEKDiveUSA 2018 Diver of the Conference to the stage:  Mr. Joshua Hotaling!

Our fourth award this evening is the TEKDiveUSA Innovation Award The inscription reads as follows: “For innovation and/or product design that has increased the safety and extended the field of technical diving.” Gareth Lock

Mr. Gareth Lock is a retired Royal Air Force flight instructor now teaching Human Factors, taking the hard won lessons learned from areas such as aviation and medicine to improve safety in sport diving; crucially recognizing that sport diving is a recreational activity and should not need any more rules or regulations. He is currently undertaking a part-time PhD examining the role of Human Factors in diving incidents and has presented at a number of international diving conferences on human error, safety culture and incident reporting. Gareth is an active advanced OC trimix diver and in 2014 qualified on the JJ-CCR. He runs a consultancy, Human in the System Consulting, which focuses on delivering research, training and coaching for Human Factors, Incident Reporting and Safety Management Systems.  Gareth is dedicated to improving diver safety and reducing incidents through Human Factors training.

TEKDiveUSA Outstanding Contribution to the Diving Industry Award The inscription reads: “The unsung hero who has gone the extra mile to support and develop others in the field of technical diving.”- Scott Sanders

I never cease to be inspired by the ways in which tech divers manage to change lives. For many of the people who voted for the Outstanding Contribution award, they were deeply affected by an instructor who did much more than just teach them to dive or take them through drills. I think it’s best to describe this instructor in the words of their students. “Scott Sanders cares about invigorating new divers and inspiring a community around technical diving. He has been the catalyst behind the growth of many local divers and his enthusiasm for technical and cave diving is contagious and inspiring.”

“I am nominating Scott Sanders because when I decided to return to diving 5 years ago, he made every effort to show me new things and encourage me to move from recreational to technical diving and eventually CCR diving. He taught, helped, spent extra time, included me in opportunities that provided new challenges while insuring I was ready to meet them. Without Scott I would at most have returned as a casual sport diver. Thanks to Scott I'm able to do more personally and help expand the sport to others.”

Scott’s own diving experience is as well-rounded as his teaching philosophy.  From laying line in virgin caves to CCR diving in every state of the Northeast US, he has dove in a variety of underwater environments. Deep wrecks, caves, mines, sumps, and shore dives are all in his log book, but his next dream dive is taking photos of historical wrecks in the St. Lawrence Seaway.  When Scott’s not underwater, you can find him spending time with his two daughters or working on personal cave and sump exploration projects.


TEKDiveUSA Lifetime Achievement Award The inscription reads: “For a lifetime of consistent contribution and discovery that has opened up the field of technical diving.” - Jill Heinerth

How do you sum up the total of a diver’s career so far, their influence on the larger community at large? It is a tall order for this diver. As one of the world’s most accomplished cave divers, this diver has already tallied more than 7,000 dives, many of them the most technically difficult possible. This diver has been responsible dozens of underwater films including films for National Geographic, breathtaking underwater photography, authored books, and spends a large portion of their time inspiring the next generation of divers.  This diver was the first person to dive into the depths of Antarctic iceberg-cave ecosystems, was on the team that created the first 3D map of an underwater cave system, and has travelled more than three kilometres into a cave on a single dive — farther than any other woman in history. Of her exploration, director James Cameron has said, “More people have been to the moon than to places that Jill Heinerth has explored deep inside our watery planet.”

Jill’s accolades include induction into the Explorer’s Club and the inaugural class of the Women Diver’s Hall of Fame. She received the Wyland ICON Award, an honor she shares with several of her underwater heroes including Jacques Cousteau, Robert Ballard and Dr. Sylvia Earle. She was named a “Living Legend” by Sport Diver Magazine and selected as Scuba Diving Magazine’s “Sea Hero of the Year 2012.” In recognition of her lifetime achievement, Jill was awarded the inaugural Sir Christopher Ondaatje Medal for Exploration. Established by the Royal Canadian Geographical Society in 2013, the medal recognizes singular achievements and the pursuit of excellence by an outstanding Canadian explorer.
You know what, I’m going to stop reading the list of Jill’s accomplishments.  We would actually still be sitting here until well after midnight!  Even with this long list of accomplishments, Jill remains one of the most humble, approachable and giving divers in our community. She continues to share her love of the underwater world, technical diving and adventure with everyone she meets through every media she can get her hands on.

Other entries from this category