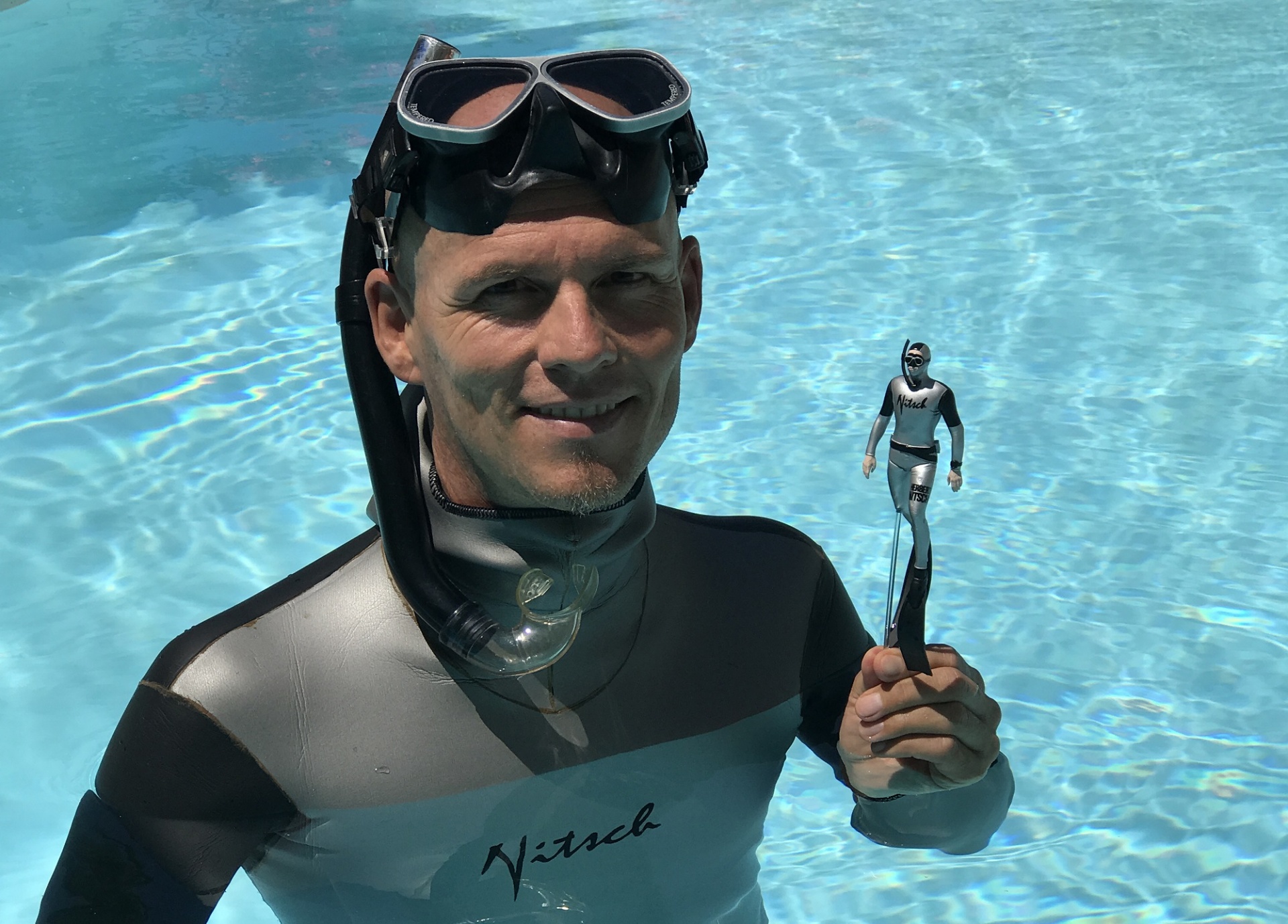 Some time ago I wrote to Herbert asking to advertise new freediver figures, but He offered something much better. So in full cooperation with Herbert his small version was created. The figure fully reproduces the painting as well as the foam cut and silhouette. Modelsfordivers courtesy of Herbert has all the rights to the image, logos and sales of Herbert Nitsch figurines, thus creating the first original figure representing a well-known person from the diving world.

"I LOVES this figurine" Herbert Nitsch"

“Each time I think I’ve reached a limit...there is a door...it opens...and the limit is gone.”

Herbert Nitsch is the current freediving world record holder and “the Deepest Man on Earth”. This prestigious title was given to him when he then set the world record for freediving at an incredible depth of 214 meters (702 feet) in 2007 in the No Limit sleddiscipline. He surpassed this world record with a No Limit dive to 253.2 m (830.8 ft) in 2012.

He is the first and only freediver documented and recorded to go beyond 180 m (590 ft) during multiple No Limit dives, and the first freediver ever to reach 100 m (328 ft) without fins or sled (free immersion, 2003). He took a break from championships in 2010 to focus solely on the No Limit discipline which is not included in competitions.

On June 6th, 2012, Herbert dove to 253.2 m (830.8 ft). During the No Limit sled-dive, well after having reached the planned depth, Herbert temporarily fell asleep due to nitrogen narcosis and consequently missed the planned one-minute underwater decompression stop on the same breath-hold. At the surface he was alert and asked for a mask to return underwater to recompress on pure oxygen, which is a standard after-dive safety feature to further off-gass. But it was too late.

While decompressing underwater, Herbert felt the onset of decompression sickness. He incurred severe DCS (type 2) which would eventually result in multiple brain-strokes. It is interesting to note that DCS symptoms occur after a dive and in serious cases can take up to 24 hours to appear. He arrived comatose at the hyperbaric chamber and his future did not look good. With a prognosis of remaining a "wheelchair-bound care-dependent patient", he dismissed himself from longterm facilitated care, and took his healing into his own hands. Two years later, against all odds, Herbert is fit, training and deep-freediving again.

Unlike other elite freedivers Herbert is self-taught. He is a pioneer in every way. He developed his own freediving techniques over the years, a methodology that largely differs from the traditional styles. He brought novel ideas to the sport that meanwhile have become common elements in the current freediving scene. For example, he introduced the monofin to distance and depth disciplines, setting first world records in all of the fin-disciplines with it. Herbert also brought inventions to the freediving scene, such as: the neck weight, pipe mask, decompression stop on breath-hold, oxygen-use after deep diving, and the EQUEX (equalization extension tool). He designed and developed advanced hi-tech sleds for the No Limit discipline with multiple safety, back-up and override systems.

High safety standards and detailed planning are always part of every dive Herbert makes. Herbert was an airline Captain for the Austrian Airlines Group for 15 years, a profession where check-lists and worst case scenarios were his daily routine.

This risk-avoiding and high-security attitude helps him to achieve his ambitious goals within freediving. Furthermore he is keen about every technical detail and design of his equipment. Together with his international technical team he designs and produces highly innovative gear with hydrodynamic shapes and lighter materials. He is currently designing an oceangoing-eco-boat and submarine to further explore the oceans at large.

Very little scientific research has been done so far on the physiological effects of freediving, especially as deep as Herbert is diving. His lung volume has been measured to be 10 Ltr (2.6 Gal), which Herbert can expand to 15 Ltr (4 Gal) with a special technique called “packing” or “buccal pumping” (healthy adult males have a lung capacity of 6 to 7 Ltr (1.6 to 1.8 Gal).

In December of 2013, Herbert proudly joined the Ocean Advocacy Advisory Board of the Sea Shepherd Conservation Society, which is active in protecting the ocean's wildlife and environments. He is also a well-sought after lecturer world wide for corporations (banks, pharmaceutical companies, airlines, events, etc.) and for the general public. When he is not freediving or lecturing, he is either writing or busy with the design of his ocean-going eco-boat on which he intends to live in the future.

His unique freediving career started with a single coincidence. In the late nineties, while Herbert was on the way to a scuba dive safari, his diving equipment got lost somewhere in transit. So Herbert went snorkeling instead of scuba diving during the entire vacation. There Herbert discovered his natural talent for freediving very quickly. He was fascinated by the nature of this sport and was progressing fast. After freediving for ten days only, he was 2 m (6.5 ft) short of the Austrian National record.

Other entries from this category